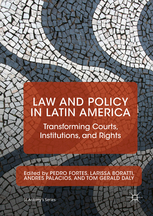 “This book offers a comprehensive introduction to law and policy responses to contemporary problems in Latin America, such as human rights violations, regulatory dilemmas, economic inequality, and access to knowledge and medicine. It includes 19 chapters written by sociologists, lawyers, and political scientists on the transformations of courts, institutions and rights protection in Latin America, all of which stem from presentations at conferences in Oxford and UCL organised by the editors. The contributors present original analyses based on rigorous research, innovative case-studies, and interdisciplinary perspectives, all written in an accessible style. Topics include the Inter-American Court of Human Rights, institutional design, financial regulation, competition, discrimination, gender quotas, police violence, orphan works, healthcare, and environmental protection, among others. The book will be of interest to students and scholars interested in policymaking, public law, and development.”

Complying (Partially) with the Compulsory Judgments of the Inter-American Court of Human Rights
González-Salzberg, Damián

A Counterhistory of Anti-Trust in Latin America
Lleras, Andrés Palacios

Latin American Constitutionalism, 1810–2010: The Problem of the ‘Engine Room’ of the Constitution
Gargarella, Roberto