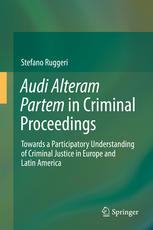 Abstract: "After analysing the Strasbourg system of human rights protection, we shall now examine the contribution of Inter-American case-law to the creation of a participatory understanding of criminal justice. Like the European Convention, the American Convention of Human Rights does not explicitly enshrine the audi alteram partem rule as such. Moreover, the Pact of San José also acknowledges the right of ‘every person’ to a ‘hearing […] in the substantiation of any accusation of a criminal nature made against him or for the determination of his rights and obligations of a civil, labor, fiscal, or any other nature’. Unlike other international human rights instruments, the American Convention provides a different linguistic expression—namely, a hearing with ‘due guarantees’ must be granted. It is not clear whether this lexical choice was due to the proximity to the common law world and especially to ties with the USA. Yet Article 8 ECHR recognised the ‘right to a fair trial’, so this difference does not seem to be of substantial importance."

Audi alteram partem in Transnational Cases Under the American Convention

Abstract: "Like the European Convention, the Pact of San José does not contain specific provisions explicitly aimed at the protection of due process rights in transnational criminal cases. Perhaps more than in Europe, the recourse to this international Charter to protect the individuals involved in transborder inquiries constitutes a relatively recent achievement, which has been rarely analysed until now. The fact that the Inter-American case-law has only rarely been called upon to examine issues concerned with due process rights in transborder cases has contributed to this situation. Moreover, a few cases were recently raised before the Inter-American institutions, providing a basis for the examination of this problematic area."