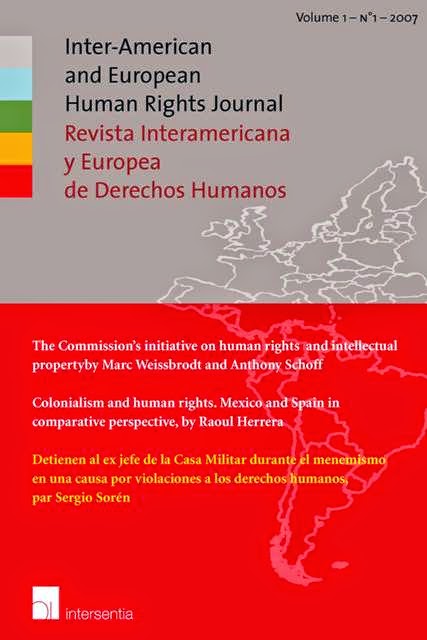 Abstract: Amnesty laws are perhaps the most formidable barrier to accountability for human rights violations in Latin America. This article examines how the Inter-American Court of Human Rights (IACtHR) confronted these amnesty laws and the effect of its rulings in a number of cases. It analyses the Barrios Altos case, Almonacid- Arellano v. Chile, Gelman v. Peru and Gomes Lund v. Brazil to make the following arguments: (1) the IACtHR established and developed the right to truth through its decisions in these amnesty cases; (2) through these decisions, the IACtHR enables legal accountability in the nations from which these cases arose; and, (3) despite these accomplishments, significant barriers to accountability remain.

An Affront to the Conscience of Humanity: Enforced Disappearances in the Case Law of the Inter-American Court of Human Rights
N. Kyriakou


Contributions and Challenges for the Inter American Court of Human Rights for the Protection of Migrants’ Rights: The Case of Vélez Loor v. Panama
G. De León

Abstract: Migration is a global phenomenon that affects every country in the world. Migrants find themselves in situations of particular vulnerability that require states to adopt measures for their protection. The international community has elaborated a generally recognized framework with this aim, and many international bodies have developed standards with the same objective. This article explores the contributions of one of these bodies to protect migrants: the Inter-American Court of Human Rights. It examines the earlier developments of the jurisprudence of the Court on this matter, and later focuses on the first case about migrant rights that was decided by the Court: the Case of Vélez Loor v. Panama. This landmark decision addressed important issues that affect the rights of migrants at present, such as the criminalization of irregular migration, the inadequate detention conditions for undocumented migrants, and the lack of access to adequate remedies to challenge the decisions that affect their rights, among others.

Examining Atala-Riffo and Daughters v. Chile, the First Inter-American Case on Sexual Orientation, and Some of its Implications
Á. Paúl

Abstract: This article begins by recounting the facts and rulings of Atala-Riffo and Daughters v. Chile, such as the Inter-American Court of Human Rights’ interpretation of the right to private and family life, its categorisation of sexual orientation as a social condition that cannot be considered a basis for discrimination, and the limits to the application of the principle of protection of the child’s best interest. The article then describes the participation of Karen Atala’s daughters in this case, which was one of the most controversial procedural matters of Atala-Riffo and Daughters. After doing so, it engages in an analysis of the scope of this case, for instance, by determining the extent to which it applies to gender identity. The article also refers to the difficulties that may arise when trying to interpret this case in regard to family life, and the relation between morality and privacy. Finally, reference is made to Atala-Riffo and Daughters’ position within the wider context of the three major human rights regional systems.

Towards a Uniform Basis for the Right to Identity in the Normative Framework of the American Convention on Human Rights
R.I. Sijniensky, N.A. Aizenstatd

Abstract: The right to identity has surfaced in the jurisprudence of the Inter-American Court of Human Rights mostly in cases dealing with enforced disappearance of children. Although not a right that is independently defined in the Convention, the Court has declared its existence through the interpretation of several other rights. The rights from which identity has been derived have not been uniform and vary from case to case. This lack of uniformity can create difficulties in the future by limiting the applicability of the right to cases of enforced disappearance of children. We propose that in order to have a uniform basis for the right to identity which is not dependent on fact specific situations and does not hinder its possible application in the future to cases not related to children, the right to identity should be derived from Article 11(2) of the American Convention on Human Rights.

Positive Obligations in the Jurisprudence of the Inter-American Court of Human Rights
L. Lavrysen

The Independence and Impartiality in the Inter-American Court’s Jurisprudence: The Specific Case of Judges’ Arbitral Removal
G. D’avino, D. Fanciullo, A. Iermano, A. Martone, R. Palladino

Abstract: This work focuses on the independence and impartiality of domestic judges and tribunals, starting from a comment on three IACtHR judgments: Chocrón Chocrón v. Venezuela, 1 July 2008; Reverón-Trujillo v. Venezuela, 30 June 2009; Apitz Barbera et al. v. Venezuela, 5 August 2008. As is well known, to ensure due process, Article 8(1) of the ACHR enshrines that every person has the right to a hearing by an independent and impartial tribunal. Given the relevance of this guarantee, the so-called “fraudulent res judicata” can result from a trial in which the rules of due process have not been respected, or when judges have not acted with independence and impartiality. Furthermore, Article 27(2) of the ACHR provides for the non-suspension of judicial guarantees essential to the protection of fundamental human rights in state of emergency. A relevant corollary of judicial independence is the inability to remove judges during their term of office. In fact, the Court holds that provisional judges exercise exactly the same functions as permanent judges and, therefore, the State must offer the guarantees derived from the principle of judicial independence to both permanent and provisional judges. Thus, starting from the above-mentioned judgments, this article analyses remedies to impartiality and independence breaches, especially regarding the judges’ arbitrary removal based on political criteria in exceptional situations.

Perspectives on the Interplay between the Inter-American Court of Human Rights and the International Criminal Court
N. Pons, D. Đukić

Abstract: After recalling the importance of the contemporary coexistence of human rights bodies and international criminal tribunals as instruments enforcing fundamental rights, the authors discuss in what manner the Inter-American Court of Human Rights and the International Criminal Court have benefitted from each other’s jurisprudence in the interpretation and application of their own legal texts. Subsequently, the authors discuss the future interplay between the two institutions with a view to highlighting the benefits and obstacles associated with such interaction.

The Identification of Victims before the Inter-American Court of Human Rights and the International Criminal Court and its Impact on Participation and Reparation: A Domino Effect?
D. Contreras-Garduño, J. Fraser

Abstract: This article analyses the evolving position of victims in international law by comparing the identification of victims before the Inter-American Court of Human Rights and the International Criminal Court. The article discusses the concept of victims, the approaches of both Courts to causality requirements between the harm suffered and the violation/crimes alleged, and the recognition of direct and indirect victims. The procedures employed by both Courts to identify victims within their jurisdictions are analysed, highlighting distinctions between the procedures adopted for the purposes of participation as compared to reparation. Conclusions are drawn regarding the evolving and expanding law and practice regarding victim identification and its impact on both Courts.

The Territorial Scope of the American Convention on Human Rights
H. De Vylder

Abstract: States often commit human right violations outside the borders of their own territory. Whereas different regional human rights supervisory bodies already attributed responsibility in such cases, the Inter-American Court of Human Rights (IACtHR) has not addressed extraterritorial acts yet. This article aims to suggest how the IACtHR might rule on the territorial scope of the ACHR. For this reason, this contribution examines the framework of jurisdiction included in the ACHR by using the principles of interpretation in the Vienna Convention on the Law of Treaties. In order to set out the ordinary meaning and purpose of “ jurisdiction”, the case law of the Inter-American Commission on Human Rights (IACommHR) and the European Court of Human Rights (ECtHR) concerning the concept of “ jurisdiction” will be scrutinized and compared. Next, the Travaux Préparatoires of the ACHR will be analysed as a supplementary means of interpretation. Questions that will be addressed in order to delineate the jurisdiction include, inter alia, (i) the basis of the jurisdiction: control over a territory or rather over a person, (ii) the possibility of jurisdiction for instantaneous acts, (iii) the possibility to divide and tailor the responsibility to ensure compliance with rights and freedoms over different member states, and (iv) the spatial limits of the jurisdiction. The article will conclude that the seemingly broad contrast between the ECtHR, which employs most oft en a limited territorial notion of jurisdiction, and the IACommHR, which bases its concept of jurisdiction on control over a person, may not be overestimated. However, in the light of the evolutive interpretation of the ACHR it seems logical for the IACtHR to use the wider personal notion of control in order to establish jurisdiction.

Abstract: This article centres on the topic of the implementation process of the IACtHR’s judicial decisions adopted within the framework of the system of individual petitions of the ACHR, by delving into the degree of actual compliance with final condemnatory judgments and the reasons why member states may not implement in practice these judgments, with a special focus on those ordering non-pecuniary reparations, rather than on those fixing monetary damage. The reason of this selective choice resides in the fact that execution by the responsible states of the IACtHR’s innovative, extensive and detailed equitable remedies – or injunctive orders – creates more difficulties than that of compensatory orders, invokes action by more disparate domestic actors (especially legislators, executives, judges and judicial systems), and makes compliance challenging.

The Inauguration of the Inter-American Defenders’ Era: Reflections after the Furlan Case
V. David

Abstract: The Inter-American human rights system has recently implemented an unprecedented legal aid model. The latter is based on the free assignment of Inter-American Defenders, who are national public defenders appointed to alleged victims in need of representation before the Court and the Commission. This article discusses some issues within the debate arising from the creation of the “Inter-American Defender” and considers its impact on and challenges for the system, the victims and the national public institutions of the region. The issuance of the first judgment in a case substantiated under this model, the Furlan case, provides an excellent opportunity to contrast the above-mentioned issues with the actual experience of the first two Inter-American Defenders.