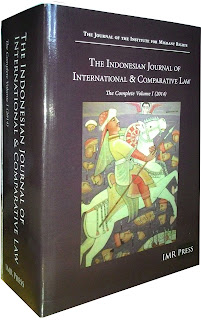 
En el último volumen de la revista Indonesian Journal of International & Comparative Law (Vol. 3, No. 1, 2016, pp. 77-100) se publicó un artículo de Valerio de Oliveira Mazzuoli y Dilton Ribeiro, titulado “The Pro Homine Principle as an Enshrined Feature of International Human Rights Law”. Este es el resumen del artículo:
“After the Second World War, human rights moved away from the margins and became an important aspect of international law. This new paradigm was based on the human being person at the centre of international human rights law. That is, instead of the state-centric Westphalian system, international human rights law is based on the human person as the source and end of law. Human rights instruments are created, interpreted and applied taking into account the human person. This pro homine framework flows from human rights instruments and was created by states themselves. The Universal Declaration of Human Rights and the American Declaration of the Rights and Duties of Man established this pro homine framework, which was later clarified by following international treaties and strengthened by decisions from the European Court of Human Rights, the Inter-American Court of Human Rights and the International Court of Justice”.