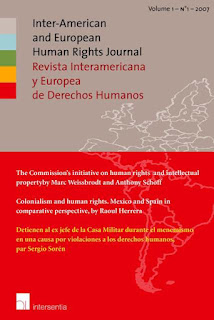 
Abstract: This article examines the domestic impact of the Inter-American Court of Human Rights’ judgment in Cabrera García and Montiel Flores v. Mexico (known as the “Ecologists Case”). After briefly summarising the facts, judgment and state of compliance of the case, the article explains how three ongoing human rights struggles in Mexico have incorporated the Ecologists Case as a tool to challenge endemic and grave abuses. These three areas of impact are: (1) the movement to reform the Code of Military Justice so as to exclude human rights violations from military jurisdiction; (2) litigation and advocacy to combat the use of torture to obtain evidence in the criminal justice system; and (3) efforts to increase conventionality control by judicial authorities. Through an exploration of each of these areas of interaction between the inter-American system and the domestic judicial system and legal framework, the article concludes that the Ecologists Case judgment has played a positive role in each of the processes evaluated. Finally, the article identifies pending necessary steps to begin consolidating the jurisprudence of the Inter-American Court in daily practice in Mexico, a monumental task that will require continued efforts, including further dialogue and mutual support between national and inter-American actors, for years to come.

Speculating on the Future of the Torture Victim Protection Act (TVPA) After Mohamad and Kiobel
F. Seatzu


Abstract: The years 2011–2013 witnessed growing judicial interest in the Alien Tort Statute (ATS) and the Torture Victim Protection Act (TVPA), the two main “weapons” for civil law claims before US courts. This interest culminated in 2012 and 2013 with the adoption of two Supreme Court decisions (Mohamad v. Palestinian Authority and Kiobel v. Royal Dutch Petroleum) that are closely linked to each other, as the Supreme Court relied on the former to decide the latter. In Mohamad the US Supreme Court unanimously stated that the term “individual” under the TVPA encompasses only natural persons and does not refer to institutions. In so holding, the Court restricted the scope of the TVPA in a way that will apparently ban corporate liability and terminate claims filed against corporations under the TVPA for allegations of aiding and abetting torture and extrajudicial killing that occurred within the territory of a sovereign state other than the United States. In Kiobel the Supreme Court addressed the question of whether and under what circumstances US federal courts can allow a civil cause of action under the ATS for breaches of the law of nations that take place in a country outside the US. Proceeding from the premise that the TVPA and the ATS have much in common because they serve similar purposes, and that the TVPA was adopted as a note to the ATS, this work speculates about the future of the TVPA after the Supreme Court’s decision to deny extraterritorial effect to the ATS in Kiobel, which prompted statements from several NGO representatives and legal experts that transnational human rights litigation (the so-called “Filártiga human rights revolution”) in the United States have now come to a stop. To this end, taking into account the ATS and TVPA’s recent judicial practice before US courts (in particular the Supreme Court’s judgment in Mohamad and the most recent US Court of Appeals’ decision on Chowdhury v. Worldtel Bangladesh Holding Ltd.), this article explores the implications of this jurisprudence on the interests of the victims of torture and extrajudicial killings. The analysis is preceded by a short account of the history of the TVPA and its relationship with the ATS, and it goes on to discuss whether (and, if so, which) claims under the TVPA will survive the Kiobel and Mohamad jurisprudence. The reason for this is clear: TVPA claims are often filed in conjunction with civil lawsuits under the ATS. The article also advocates an interpretation of the TVPA that is able to keep this Act alive and relevant in practice, by showing that there is still room for civil law claims involving torture and extrajudicial killings grounded on the TVPA, and it ends with some concluding reflections.

Abstract: This article focuses on four cases heard by the Inter-American Court of Human Rights that deal with the amnesty laws in Brazil, Chile, Peru and Uruguay. In this analysis, from a theoretical perspective that owes much to Robert Alexy and Martti Koskenniemi, the author intends to describe and explain the components of the arguments offered by the Court to justify its decisions. The proposal is therefore to research the legal arguments used in a specific context, i.e. in the amnesty law cases involving the four countries mentioned, with a view to describing patterns of justification and types of arguments

Abstract: In situations of parental child abduction the abducting parent often prevents the other parent from maintaining any contact with the child. The Hague Convention on the Civil Aspects of International Child Abduction provides for a framework of cooperation between the authorities of the state where the child has its habitual residence and of the state where the child allegedly has been abducted. The object and purpose of this convention is to allow for the prompt return of abducted children. This article looks into how international human rights mechanisms have dealt with international abduction cases, and in particular, how they have interpreted the requirement of prompt return to their place of habitual residence and the right to effective contact between children and their parents. After an introduction to the international regulation on the right to prompt return of internationally abducted children, the article analyzes the jurisprudence of the Human Rights Committee, the European Court of Human Rights and the Inter- American human rights system. The article shows that these bodies have declared the international responsibility of states for tolerating an excessive delay in the domestic restitution procedures or for not respecting due process rules, although with some nuances.

New Trends on the Right to Non-Discrimination in the Inter-American System of Human Rights
J.L. Caballero Ochoa & M. Aguilar Contreras

Abstract: Nowadays, one has started to study the principle of non-discrimination as an independent right, and not just as a general principle, susceptible of being violated autonomously. This perspective is the result of some paradigmatic cases which not only reflect the weakness of states to guarantee human rights, but also the fact that discrimination exists in an isolated manner, both in written law and in practice, and it takes place when exercising personal autonomy. In this sense, the new trends relating to this right in the light of international treaties have enriched its development and implementation, including by adding new categories protected from discrimination; the adaptation of new practices in its implementation; as well as the creation of a methodology of analysis based on the proportionality test. In this regard, cases such as Campo Algodonero v. Mexico and Atala Riffo and daughters v. Chile before the Inter-American Court of Human Rights, are clear examples of the application of this new interpretation of the right to non-discrimination. Furthermore, the discussion has also considered the creation of new international instruments that – as before other Courts – has widened the protection of the right to non-discrimination. This has happened in the past, for example, with racial discrimination matters or women’s rights. Finally, the evolution of the jurisprudence has tended to equate the right to non-discrimination with equality before the law, in order to consider it for national legislation

The Emergence of the Right to Water in the Inter-American Court of Human Rights
J. Murillo Chávarro

Abstract: The human right to water started to emerge in the inter-American human rights system in the last decade. Even though none of the conventions on human rights that are in force in this regional system incorporate the human right to water, the Inter-American Court of Human Rights examines the role that drinking water plays in the realisation of other human rights. This article focuses on the analyses of case law of the Inter-American Court on Human Rights where access to water has been guaranteed. Although there are only few judgments concerning the protection of this right so far, they are remarkably important. The examined case law involved two different groups of people that are found in a vulnerable situation.

The Need to Deal with All Missing Persons Including those Missing as a Result of Armed Conflict, Disasters, Migration, Human Trafficking, and Human Rights Violations (including Enforced Disappearances) in International and Domestic Law and Processes J. Sarkin

Abstract: This article examines the issues concerning missing people in the domestic and international context. Who they are, how many have gone missing and for what reasons people go missing, are analysed. The definition of what is, and what should be, a missing person is interrogated. It is argued that the present definition, that only includes people missing as a result of armed conflict, is too narrow. It is contended that who the missing are, ought to include those missing as a result of enforced disappearances, disasters, migration, human trafficking, organised crime, various acts of violence and other events. It is claimed that there is a limited understanding of the global dimension, or the true scale of the problem of the missing and the disappeared. It is argued that international and domestic processes to deal with the missing is inadequate and needs to be reformed. Recommendations are made to ensure that law reform occurs, and various processes are put into place internationally and domestically, including new institutions and new standards. It is suggested that there is a need for an international mechanism and standing capacity to provide a structured and sustainable response, including forensics, for all types of missing persons. Protocols are needed to develop cooperation strategies and the technical infrastructure required. It is argued that a global forum on missing persons should be created and round table meetings and other events could occur annually, to ensure the voices of families and survivors, international and other organisations as well as the sciences are heard.