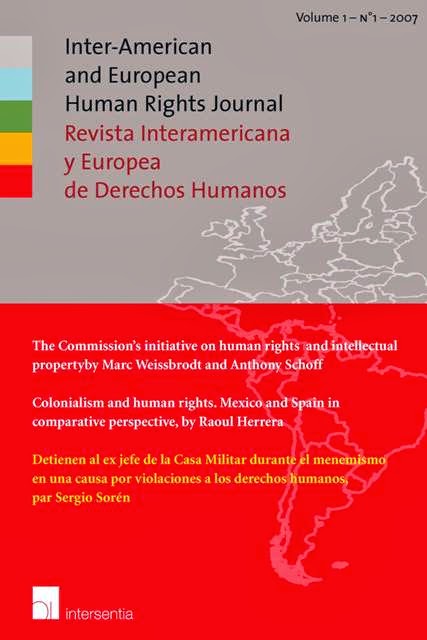 Abstract: The auction system is the one preferred for the assignment of spectrum access rights by those who prioritize economic efficiency. However, commentators who are primarily concerned with freedom of expression or human rights in general tend to be mor

Medical-Related Expulsion and Interpretation of Article 3 of the European Convention on Human Rights
E. Webster

Abstract: This article critically reviews the jurisprudence of the European Court of Human Rights (‘the Court’) in cases of expulsion of non-nationals receiving medical care for a serious health condition, based upon Article 3 of the European Convention on H

Abstract: In this critical note it is argued that one of the crucial arguments of the recent judgment by the Inter-American Court of Human Rights in Artavia Murillo fails and shows a common conceptual confusion in legal argumentation. The Court considers tha

Abstract: On 14 April 2010, the Argentinean Supreme Court referred a complaint filed by 150 Spanish citizens, victims and relatives of victims of the Francoist regime, to the competent lower Federal Court of Buenos Aires for further investigation. This is th

Abstract: With the Treaty of Lisbon, which amends Article 6(2) of the Treaty on the European Union (TEU), and obliges the European Union (EU) to accede to the European Convention on Human Rights (ECHR), and with the Draft Accession Agreement being finalised, the accession of the EU to the ECHR seems to be close at hand. However, the question still remains whether the EU, with its specific legal order, will be able to function in the ECHR system. On the basis of the Draft Accession Agreement, this article critically analyses the accession from a procedural point of view in order to anticipate on what the protection of human rights will look like after the accession and to underline the procedural difficulties that remain unanswered, while at the same time making some suggestions on how to overcome these difficulties.

Abstract: The article deals with the positive obligation to investigate, prosecute and punish international crimes of serious human rights violations by way of jus cogens. In this sense this obligation is part of the nullum crimen nulla poena sine lege princ

Abstract: The establishment of procedures without a possibility of appeal has emerged as a means to speed up criminal prosecutions. In order to try to compensate for the loss of challenging a decision, typical of a single-judge court, multi-judge courts have been created by the constitution. However, Article 8(2)(h) of the American Convention on Human Rights establishes the right to fully appeal convictions. The Inter-American Court of Human Rights has interpreted this article in Herrera Ulloa v. Costa Rica. The interpretation given to this clause by the Court in the aforementioned case has led the Supreme Court of Justice of Argentina to resort to the old “Leistungsmethode” theory in order to determine the scope of the ordinary review imposed by international standards. Our contribution aims to analyse the concept of appeal, taking into account the German “Leistungsmethode”. Likewise, the contribution aims to identify the challengeable aspects in cases of condemnatory judgments, and to provide a brief review of regulatory schemes on double jeopardy. It is argued that the establishment of horizontal remedies constitutes a normative advance which reconciles the possibility to appeal a judgment of acquittal with the full operability of the guarantee.

How Does the European System of Human Rights Protect Detainees in Bad Health?
C. Burbano Herrera

Abstract: Interim measures in the European human rights system may be defined as a tool, the purpose of which is to prevent irreparable harm to persons who are in a situation of extreme gravity and urgency. Interim measures result in immediate protection bei